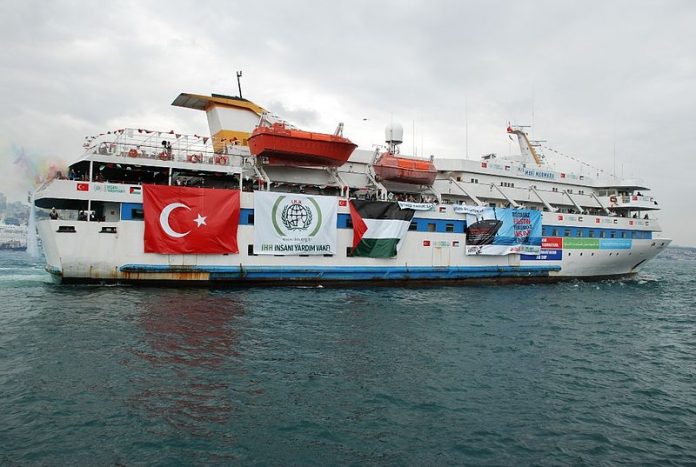 Tel Aviv, Israel (Weltexpress). I have a unique confession to make: I like Gaza.

Yes, I like this far-away corner of Palestine, the narrow strip on the way to Egypt, in which two million human beings are crowded, and which is closer to hell than to heaven.

My heart goes out to them.

I have spent quite a lot of time in the Strip. Once or twice I stayed there with Rachel for a couple of days. I became friendly with some people whom I admired, people like Dr. Haidar Abd-al-Shafi, the leftist doctor who set up the Gazan health system, and Rashad al-Shawa, the former Mayor, an aristocrat from birth.

After the Oslo agreement, when Yasser Arafat came back to the country and set up his office in Gaza, I met him there many times. I brought to him groups of Israelis. On his first day there he sat me on the dais next to him. A photo of that occasion now looks like science fiction.

I even came to know the Hamas people. Before Oslo, when Yitzhak Rabin deported 415 Islamic activists from the country, I took part in setting up protest tents opposite his office. We lived there together, Jews, Christians and Muslims, and there Gush Shalom was born. After a year, when the deportees were allowed back, I was invited to a public reception for them in Gaza and found myself speaking to hundreds of bearded faces. Among them were some of today’s Hamas leaders.

Therefore I cannot treat the inhabitants of the Gaza Strip as a faceless gray mass of people. I couldn’t stop thinking about them during last week’s terrible heat wave, about the people languishing in awful conditions, without electricity and air conditioning, without clean water, without medicines for the sick. I thought about those living in the houses severely damaged in the last wars and not repaired since. About the men and women, the old, the children, the toddlers, the babies.

My heart was bleeding, and was asking who was to blame.

Yes, who is to blame for this ongoing atrocity?

The uninvolved bystander wonders: how can that be? After all, the entire Palestinian people are in existential danger. The Israeli government tyrannizes all Palestinians, both in the West Bank and in the Gaza Strip. It keeps the Strip under a strangling blockade, on land, in the sea and in the air, and is setting up settlements all over the West Bank, to drive the population out.

In this desperate situation, how can the Palestinians fight each other, to the obvious delight of the occupation authorities?

That is terrible, but, sadly, not unique. On the contrary, in almost all liberation struggles, something similar has happened. During the Irish struggle for independence, the freedom fighters fought against each other and even shot each other. During our own struggle for statehood, the Haganah underground turned Irgun fighters over to the British police, who tortured them, and later shot up a ship bringing recruits and arms to the Irgun.

But these and many other examples do not justify what is happening now in Gaza. The struggle between Fatah and Hamas on the backs of two million people condemns these to inhuman living conditions.

As an old friend of the Palestinian people in their fight for liberation, I am deeply saddened.

But there are more partners to the atrocious blockade on Gaza.

Israel can blockade the Strip only on three sides. The fourth side is the Egyptian border. Egypt, which has in the past fought four major wars against Israel on behalf of the Palestinian brothers (in one of which I was wounded by an Egyptian machine-gunner) is now participating in the cruel blockade on the Strip.

What has happened? How did it happen?

Everyone who knows the Egyptian people knows that it is one of the most attractive peoples on earth. A very proud people. A people full of humor even in the most trying circumstances. Several times I have heard in Egypt phrases like: “We do not like the Palestinians very much, but they are our poor cousins, and we cannot abandon them under any circumstances!”

And here they are, not only abandoning, but cooperating with the cruel occupation.

All this why? Because the local rulers in Gaza are religious fanatics, just like the Muslim Brothers in Egypt who are the deadly enemies of today’s Pharaoh, General Abd-al-Fatah al-Sisi. Because of this enmity, millions in Gaza are punished.

Now rumor has it that Egypt would relent, if the Gazans accept an Egyptian stooge as their ruler.

The Israeli blockade of Gaza is completely dependent on the Egyptian blockade. Proud Egypt, which claims to be the leader the entire Arab World, has become the handmaiden of the Israeli occupation.

Who would have believed it?.

But the main responsibility for the atrocity in Gaza falls, of course, on us, on Israel.

We are the occupiers – a novel type of occupation by blockade.

The justification is clear: They want to destroy us. That is the official doctrine of Hamas. The mouse hurls terrible threats against the elephant.
True. But…

But like all religious people, they find a hundred different ways to cheat God and get around his prohibitions.

Hamas has declared that if Mahmood Abbas made peace with Israel, and if the Palestinian people confirmed the peace by plebiscite, Hamas would accept it.

In many hidden ways, Israel does cooperate with Hamas, especially against the even more extreme Islamists in the Strip. We could easily reach a modus vivendi all along the line.

So why must the people in Gaza suffer so grievously? No one really knows. Because of the mental laziness of the occupation. Because that’s what we are used to doing.

Here is a mental exercise: What if we did the very opposite?

What if we announced to the people in the Gaza Strip: the Palestinian Authority in Ramallah is now paying for only two hours of electricity a day. But seeing your suffering, Israel has decided to provide you with electricity for 24 hours for free.

What would be the effect? How would Hamas react? How would it affect the level of violence and security costs?

For the long run, there are many Israeli and international plans. An artificial island in the Mediterranean opposite Gaza. An airport on the island. A deep-sea port. Peace in fact, even without declarations.

I believe that this is the wisest way to proceed. But wisdom has little chance.

And the world? Alas. the world is busy. It has no eyes for Gaza. Better not to think about that awful place.

Kissinger, a dyed-in-the-wool politician, brings realism to the Ukraine debate – and confirms a “conspiracy theory”

The Frankfurt Music Fair – The world’s biggest trade fair for...

The March of Folly

World of TUI does a world of good on the way...

Kissinger, a dyed-in-the-wool politician, brings realism to the Ukraine debate –...

Three candidates and a Joker – The CDU is in for...

The Great Railway Scandal – Merkel is a moral heroine, Netanyahu...